Treasury Secretary Janet Yellen warns Congress it needs to raise or suspend the debt ceiling as U.S. government is poised to run out of cash

As the U.S. government gets closer to being unable to pay its bills, Treasury Secretary Janet Yellen on Wednesday urged Congress to act quickly to raise or suspend the debt limit. The divided Congress faces a growing list of urgent matters when it returns from recess later this month, but Democratic leaders said they must address the debt limit.

In a letter to Congressional leaders, Yellen wrote that based on the administration’s best information, cash and extraordinary measures would be exhausted in October.

“A delay that calls into question the federal government’s ability to meet all its obligations would likely cause irreparable damage to the U.S. economy and global financial markets,” Yellen wrote. “At a time when American families, communities, and businesses are still suffering from the effects of the ongoing global pandemic, it would be particularly irresponsible to put the full faith and credit of the United States at risk.”

The debt limit, which is the maximum amount the U.S. can borrow by law, was suspended for two years in 2019 under President Trump, but the suspension expired at the end of July. The Treasury Department has been using so-called extraordinary measures to pay its bills since, including suspending certain investments. If its cash on hand and temporary measures are fully exhausted, it would be the first time in history the U.S. was unable to meet its financial obligations.

“When President Trump was president, we Democrats supported lifting the debt ceiling because it’s the responsible thing to do. I would hope that Republicans would act in a similarly responsible way,” Pelosi said.

Pelosi said they have several options to address the debt ceiling, but it “has to happen.” The speaker said Democrats would not include it in the $3.5 trillion budget reconciliation bill being negotiated. Senate Minority Leader Mitch McConnell has predicted no Republicans would vote to raise the debt limit and said Democrats would likely need to include it in their reconciliation bill, where they would not need Senate Republican support.

“It would be just the height of irresponsibility for Republicans to play games, to take the debt limit hostage,” Senate Majority Leader Chuck Schumer said Wednesday. “That would be playing with the full faith and credit of the United States, and it would be a horrible act, a despicable act.”

On Monday, the Biden administration also sent Congress guidance for a so-called continuing resolution to keep the government funded temporarily as they hammer out the full legislation.

In 2011, Republicans used the debt limit to pressure the Obama administration to address spending. While the parties eventually reached an agreement, the uncertainty led to the U.S. having its credit score downgraded for the first and only time in history. 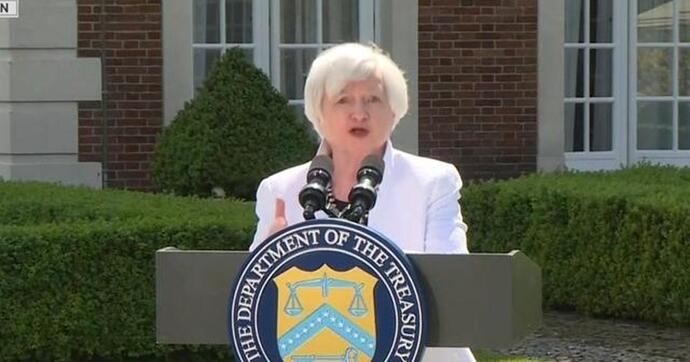 Senate Minority Leader Mitch McConnell has predicted no Republicans would vote to raise the debt limit.

They will never run out of cash, they will just print more. The worst thing Nixon ever did wasn’t Watergate it was taking us off the gold standard. You can’t spend what you don’t have.

The bill going through the house has a hidden agenda for those who have saved their entire life for retirement. The Democrats want to tax IRAs ,and other retirement that have been saved. Does anybody really believe this goes for Pelosi and her husband who over the last year made over 33 million on the stock market.

We are already past the point of no return. Yellen is a hardcore leftist. She wants the economy to tank so she can help her DNC masters usher in the next level of socialism.