The fight over humiliating mask mandates in schools turns violent 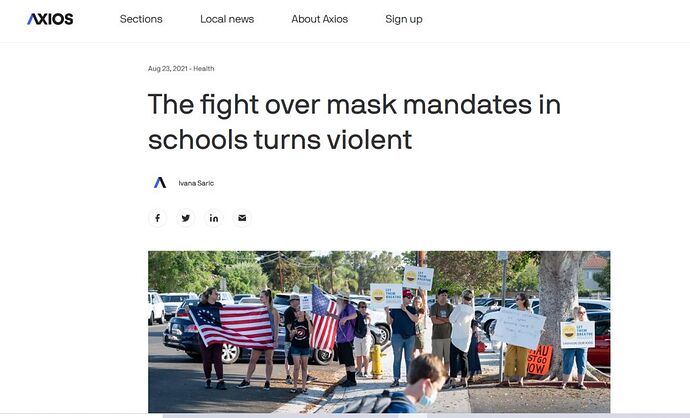 As children head back to the classroom, a “vocal minority” in the U.S. have resorted to violence or disruptive measures to protest against mask mandates in schools.

Driving the news: While the majority of Americans support the mandates, per a recent Axios/Ipsos poll, back-to-school confrontations across the U.S. have gotten so hot that teachers and other officials have been punched, hit and screamed at.

In Texas, Tom Leonard, the superintendent of Eanes Independent School District, wrote in a note to parents and staff last week that the return to school has been marked by “a few sad moments.”

In Northern California, a parent allegedly left a teacher bleeding and requiring hospital treatment — after the parent tried to attack the principal over masks and the teacher jumped in, KCRA-TV reported.

In Kansas last week, officials in Douglas County were confronted by angry unmasked protesters who opposed an indoor mask mandate for 2- to 12-year-olds, invoking comparisons to the Taliban and leaders of Japanese internment camps, according to AP.

Even before students headed back to the classroom, school board meetings across the U.S. saw heated confrontations over whether masks should be required for students and teachers.

The big picture: Public health measures like mask and vaccine mandates have become a political flashpoint across the country even as COVID-19 cases surge nationwide due to the Delta variant. 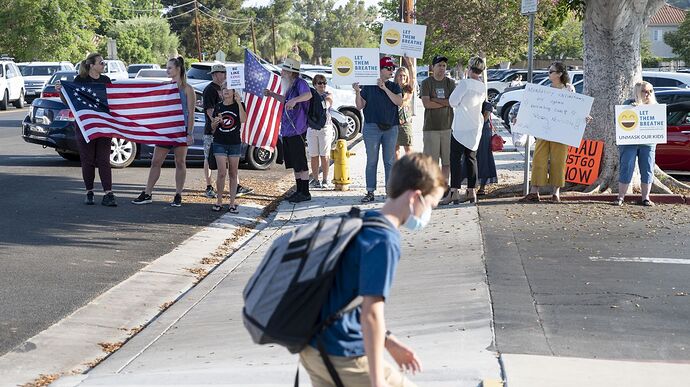 The fight over mask mandates in schools turns violent

Teachers "are fearful," a superintendent in Northern California said.

Good. We need to be seeing more of this. These tyrants are ruining kids with this mask mandate garbage. Parents need to stop being scared of the woke mob and stand up against these vaxmaxx lunatics.

Well…it’s about fucking time. Seriously. Let’s get this shit started. It’s all crashing down anyway.

When little Joey tells mommy that he doesn’t want to wear the mask because people make fun of him is when small change will occur.

If the parents do nothing about it then their kids will resent them for life.

If someone is pummeled to death for confronting someone about not wearing a face diaper, does that count as a covid death?

“The teachers have definitely been on edge. They are fearful because the last thing they want is to have an issue with a parent,”

Then maybe they shouldn’t be pushing their unions so hard for keeping kids out of school so they can sit on their fat asses at home all day doing nothing…or claiming that COVID is so serious that they are afraid for their health and that kids must be masked.

Teachers and journalists are at the same level of irredeemable filth at this point.