The polling results reflect the general lack of clarity Americans, on the whole, have when it comes to America’s role in the world. Younger Americans tend to be Democrats and are opposed to the US being the self-appointed world’s policemen, which is almost always a cover for neo-imperialism. Older Americans are more apt to be GOP supporters and view Russia in Cold War terms, but some of them, influenced by Trump’s seeming love affair with Putin and other autocrats, might be pro-Russia, or, at least, oppose US involvement. Didn’t that Ukrainian leader keep his distance from Donnie?

The US, of course, has very little, if any, moral standing when it comes to demanding Russia refrain from invading a sovereign country. We have invaded, or supported invaders more than any other in the post-WWII period (Cuba, Vietnam, Dominican Republic, Grenada, Panama, Iraq, Afghanistan), and subverted others (Iran, Chile). International polling consistently shows the US is considered, by far, the greatest threat to world peace. Moreover, we have never disavowed the Monroe Doctrine, which led us to invade our southern neighbors countless times under the guise of defending our national interests.

Our non-existent moral standing doesn’t mean our general stance in this instance might not be appropriate. Every broken clock tells the correct time twice a day.

Unfortunately, while US opinion is not in favor of getting militarily involved in the Russia-Ukraine conflict, US mass media, including allegedly liberal media, such as CNN, never abandon the Cold War script. CNN, for example, has a roster of retired military brass and intelligence officers. They always seem to be favorable to US action. I confess to not watching Fox coverage. I wonder if it might be more balanced because of the division between Cold War sentimentalists vs. Putin admirers among their viewers. Carlson apparently reflects that Trumpist outlook. He’s a huge fan of right-wing autocrats like Orban in Hungary.

Then there is, of course, the commercial value to news media of military conflict. Ratings soar and ad rates do too.

One thing we can be pretty sure of based on history. Even if Americans, when polled, seem to have no appetite for war, if the US gets involved, public opinion shifts into rooting for the home team mode. Sometimes, if the war is over in a few days, as in the case of Grenada and Panama, public support remains high. But if a war drags on that changes and it becomes a political liability. Biden’s popularity is very low now, primarily for reasons beyond his control. There must be some temptation to do something to get a boost. Tough sanctions are one thing, but he might feel pressure to go beyond that. 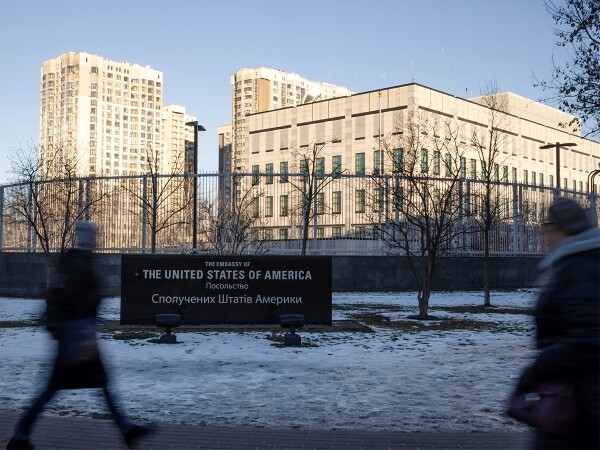 What Americans Think About The Crisis In Ukraine

For days now, there have been reports that Russia could attack Ukraine at any moment, although it’s possible continued diplomatic talks could avert military con…

I am not sure what you are trying to argue here. You seem to be arguing that the U.S. should do something in Ukraine, but have not defined what that should be. You have suggested that the U.S. does not have better moral standing as a “world’s policeman” than Russia, yet are suggesting that it could do something in this context (it’s not clear what) that could be “appropriate”. You don’t like the viewing of this conflict through a Cold War prism, but you seem to be criticizing younger people for not adopting that prism and you, yourself, seem to be framing this as an echo of the Cold War (which, frankly, it is).

I certainly hope that you weren’t just rambling in order to push an absurd “wag the dog” fable in which Biden (who so far has seemed quite effective at pushing Putin into a corner that has forestalled and may prevent war) is secretly plotting to start a major war in Europe in the hope of political gain.

Of the list of countries whose sovereignty we violated, all were under Republican regimes, or planned under one–Cuba–and the exception was pretty much canceled by JFK, sadly stranding the Cuban invaders.

Eisenhower for Iran, Nixon for Chile and escalating Vietnam, Reagan for Grenada, GHWB for Panama, GWB for Afghanistan and Iraq. Obama withdrew from Iraq, and Biden from Afghanistan. The world likely notices which political party is in charge.

Whatever else may be going on, Putin seems to want to remind the West that it remains a nuclear power. 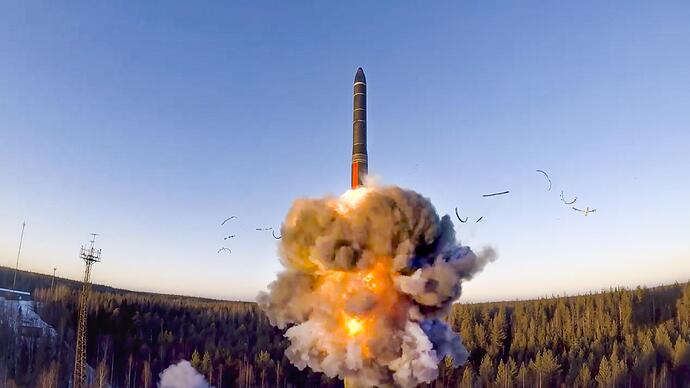 MOSCOW (AP) — The Russian military on Friday announced massive drills of its strategic nuclear forces, a stark reminder of the country's nuclear might amid Western fears that Moscow might be preparing to invade Ukraine .

Somehow I am confident that regardless of how much you think the CNN and Fogs Noose talking heads from the military will plump for military involvement on our part, Biden won’t be sending troops or “advisors”.

My feeling is that Putin will bite off a huge chunk or all of Ukraine, install a puppet regime with appropriate pig lipstick, and everything will die down (along with every Ukrainian Putin wants dead and a few thousand more besides).

As it almost always has been in world history.

There are so many potential narratives and agendas. Putin clearly is up to something and he’s an agitator/confuser type. This staging he’s doing is expensive and huge (for them), I doubt it’s just an act. He may be doing this as a distraction to allow China to invade Taiwan faster - we moved some carriers closer to Ukraine. Thankfully our military can walk and chew gum, but we have compromised our presence near Asia to hang out near Ukraine and Putin obviously knows that. Or he is doing it to test NATO’s resolve for later reference and to agitate alliances. I’m not ruling out US boots on the ground if there is war in the streets of Ukraine. 82nd Airborne is ready to drop in at a moments notice. But if we go, it may be Air Force first. At least that’s what history shows and my air force friends think. All depends on what route Putin chooses, the geography, and the weather. It’s warming up fast and he’s pressed for time here.

I’m just gonna pray for peace and try not to think about it. I have skin in this game and sometimes denial can work for a while haha.

Biden’s popularity is very low now, primarily for reasons beyond his control. There must be some temptation to do something to get a boost.

Are we talking about the human man who lives on planet Earth named Joe Biden? Or someone only you can see in your mind? Because war with Russia is not tempting to anyone.

I’m not concerned with how much moral standing the US has or even I have - they have practical standing. Putin can’t be allowed to do what he is doing under any circumstance. There is no world possible where Russia doing as it pleases is a good thing for moral, immoral or neutral people. Anyone who thinks it’s not our business and we should shut up is a fool or worse. However, it is also about morality or just plain human decency. Putin is a lunatic for doing this and it cannot be allowed to happen unhindered because the result is death.

I will add this. I’m tired of the argument that we did X in such-and-such year and wasn’t that bad so we should sit this one out because, darn-it, aren’t we ashamed of ourselves. Um, Russia is poised to invade another country and kill a lot of people right now. This isn’t a history lesson - it’s happening now.

JFK sent the first troops to Vietnam. LBJ invaded the Dominican Republic. Trump actually made the deal to withdraw by a specific date from Afghanistan. Biden just carried it out. If we move from actually sending troops to subverting regimes we have to say the overthrow of Sukarno and massacre of 500,000 in Indonesia was facilitated by us under LBJ, the Honduran coup was supported by Obama.

Just as importantly, regardless of whether the GOP started the bulk of our interventions, the Dems hardly objected. Doesn’t almost every pol genuflect to our “bipartisan” foreign policy and lament the same doesn’t exist in domestic policy? Are the Dems, who control Congress now, protesting Biden’s continuing to arm the Saudis and facilitate the massacres in Yemen. Has Biden reversed the economic strangulation of Iran and Cuba?

He made the first escalation above the Eisenhower “advisors”. And we were technically supporting an ally, not violating sovereignty.

Trump had four years during which he could have withdrawn, no points for a clumsy agreement that hobbled Biden.

I’ve been looking at and thinking about the ton of discussion about this whole thing. My completely non-expert position on it is 1) It’s all laced with counter-intelligence, social media and operative influence, and–most important–old thinking. That is, the situation is now, but a lot of the discussion is based on back then, and history tells us there are surprises that no one was thinking about when things turn hot. And 2) Putin is not a mastermind, and he probably doesn’t have a long plan. He’s not a complete imbecile, for sure, but in the end he’s another fucking little man made big who’s gotten away with a lot of shit, and he simply wants to get away with more shit. I think, like some, that he’s in a corner presently. I also think that it’s quite likely that he’ll start firing a whole bunch of shit into Ukraine because he doesn’t know what else to do from this corner he’s in.

A lot of stuff, certainly the fate of the poor Ukrainians, will hang on what the rest of the world does if he does it. I don’t think it will turn into WW3, but in a way Putin may be handing Biden an accidental chance to step up bigly as a US President

I’m not opposed to us acting with strong sanctions or arming the Ukrainians. It’s the holier than thou attitude that is objectionable and we do that even when we are the aggressor. I do wonder what your attitude was regarding instances of US aggression and whether you thought the USSR, for example, should have taken steps to oppose it? Were you on the Soviet side during the missile crisis, Vietnam, just to name a few cases?

Technically supporting an ally…it was a puppet regime Eisenhower created to bypass Geneva.

Obama had eight years during which he could have withdrawn from Afghanistan. He gets no pass. Obama also made it possible for the slaughter in Yemen to make the Saudis happy because of the Iran deal.